'The business of Made to Measure Tailoring is abundant

It is the go to option for men who would otherwise struggle to find a wedding suit that fits; be they small, large or more often than not very, very tall!

I would describe David Giles as very tall, but tailoring a suit for his exemplary physique was the simplest of the challenges he approached us with at the end of the summer.

David and his Fiancé Cara, thanks to Pearl Drops, were the lucky recipients of £25,000 to spend on their ideal wedding.

So far so good! Only David and Cara had to agree to leave all of the components of their dream day to public choice.
Venue, Car, Cake, Flowers, Dress and Suit. (This is where we come in).

All elements were to be selected from three choices including the wedding suit.
David and I selected three contrasting cloths, the most popular of which was then decided upon by the public as part of a Social Media campaign by Pearl Drops.

We originally chose a light autumnal tweed in Wool and Cashmere with a subtle pink overcheck, a striking Sapphire blue flannel cloth and a traditional dove grey wool and silk fabric.
It was a close call and the grey was ahead by a nose until the Sapphire finally won the public vote at the beginning of September.

We then set about adding the finishing details to our chosen suit which was to be a single breasted Three Piece design. Bells, Whistles, Contrast Stitching and an extremely subtle lining (cough, cough)...

Three weeks later and the RO1909 Made to Measure Suit arrived in all it's Sapphire glory.
We teamed it with a Slim Fit Eton Shirt, Ermenegildo Zegna Tie (after much deliberation) and Santoni Brown Deerskin Shoes.

Sometime towards the end of September our First Floor which is home to the Tailoring and Made to Measure Department was taken over by a film production team for several hours to produce the epic two minute video which I am pleased to invite you to see below.

It may be of interest to you to know that David Giles is at least 25 stones in weight but thanks to the genius of tailoring* he is transformed into the stylish mannequin we see before us.

The biggest challenges for myself were firstly having to make an effort to look smart for the cameras and secondly summoning up some pearls of useless style wisdom to impart during the filming. 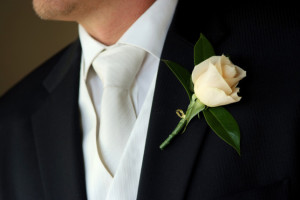 Further Made to Measure Blog 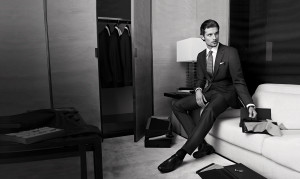